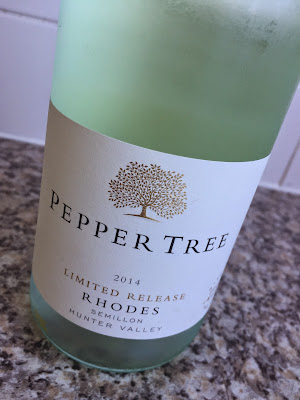 As you can see here, here and a little here, the 2014 vintage is being plumped as one of the Hunter’s best in some time, the near perfect (which means dry) vintage affording Hunter winemakers a picking date luxury rarely afforded.

Curiously given this stated vintage perfection, I’ve found some of the Sems a little too ripe to be great, almost as if the joy of flavour led some makers to pick a little later than normal. It’s not a hard and fast rule, of course, but I still think 2014 will end up more like the warm vintages of 2005 or 07, which were good but not ‘classic’ Semillon years (though great for reds).

Regardless, I approached these two Pepper Tree Sems with anticipation. Scotty Comyns has the reins at Pepper Tree now and he definitely knows a thing or two about Hunter wine, so already off to a good start.

Given the quality fruit sources I had high expectations too – Alluvius comes off Ken Bray’s vineyard, source of the Thomas Braemore Semillon and Meerea Park Alexander Munro Semillon, while Rhodes comes from the Trevena and Casuarina vineyards on Hermitage Road, next to Tyrrell’s HVD.

For all that context, however, both this wine looked a bit flat and simple on first opening. There was nothing wrong, but the Alluvius in particular looked a bit ripe and melony – more juicy fruit than the classic blinding acidity, the Rhodes a little grassy and round.

So anyway I stuck them both back in the fridge and went to bed.

36 odd hours later I busted the caps again and, butterfly like, they’d turn into something special…

Crucially, the melon fatness had settled down and the apple citrus power had taken over in the Alluvius, the massive concentration and bombastic fruit (ala the ’13) taking over. It’s the sort of fruit and acid power combo that just lingers with and lingers, smacking you around the head and begging to be in the cellar.

In comparison the Rhodes looks a little softer, more lemon and sherbet with more softness and perfume without the acid grind. Nice, but not quite in the same realm as the Alluvius. 17.7/20, 92/100

What’s the real conclusion from this experiment? Young Sem can be a tricky beast. Wines like these two may show some of their cards early, but on the whole, they’re a patient person’s pursuit…