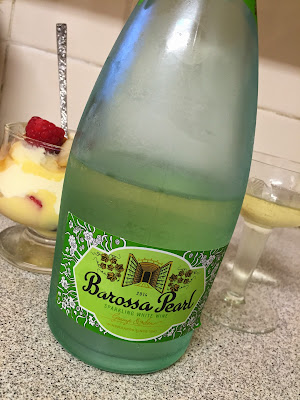 I’m too young to remember much about Barossa Pearl, purely because I was born only a few years before it was discontinued (the last batch was in 1983). In fact, my parents don’t remember much either, though they have fond memories of ‘porphyry pearl’ (which was a competitor).

Still, after tasting this revivalist Barossa fizz, I can see what all the fuss was about.

Way back in the 50s, Orlando’s then technical director (who still lives in the Barossa) Colin Gramp and Guenter Prass developed Barossa Pearl as their own version of a German ‘semi-foaming’ perlwein (or an Italian frizzante).

Built around Barossa Riesling and Semillon, the original Barossa Pear style was lightly fizzy and off-dry – the perfect drink for anyone used to drinking soft drink (which was also booming in the 50s).

Launched around the 1956 Melbourne olympics, it was an instant success, with Orlando unable to keep up with demand. Indeed Barossa Pearl is credited with weaning a generation off sherry and port in the 1950s with some 27 million bottles sold.

The rationale for bringing back this forgotten icon is simple – as Max points out, the thirst for old labels is strong, plus sweet sparkling wine (moscato) is very much back in fashion.

Yet criticising this as just another marketing ploy for the innovative Orlando/Jacobs Creek team is folly. Because this has a genuine place, much like moscato.

Importantly, this is based upon the original ‘recipe’ of naturally fermented Barossa Riesling and Semillon juice. The alcohol is just 10% (so higher than most moscato) and the sweetness ‘target’ is 40g/L with a TA of 6.7g/L – so in other words, sweet.

What rescues this from absolute ignominy is that you can smell the faint grassiness of early picked Barossa Sem and the flesh of limey Barossa Riesling, giving this a varietal/region character typically missing in a ‘grapes from anywhere’ moscato.


It’s ultimately a little too sweet to be anything but off dry, simple grape juice, but at $15.99 that is exactly the intention. I went searching for a perfect wine match and was rewarded at Christmas when my sister whipped up a truly excellent trifle, which really worked with the Barossa Pearl (though I couldn’t drink more than a glass, and it has to be icy cold).

Fun and juicy simple fizz, this is spot on really, especially for drinking while wearing these, preferably driving this (no DUI laws in the 50s) and hanging out all day here. I remember this wine being part of a family celebration !
I was born in 1954 so during my childhood and teens it was around ! Love the bottle, not my
taste either ! way too sweet ! but going to buy a
couple of bottles anyway to go down memory
lane ! loved this article