A surprise from the fridge: Streicker Bridgeland Block Syrah 2011 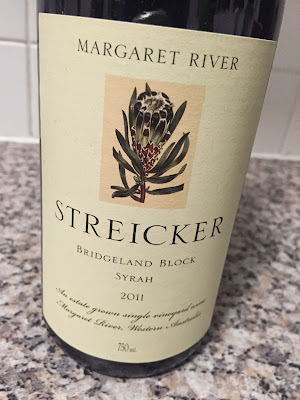 That’s how long this Margaret River Syrah/Shiraz (just call it Shiraz damn it) sat in my fridge, a single glass missing from the bottle, the remainder sitting forlornly. Forgotten.

It wasn’t meant to be so long between sips. When I first opened it I thought ‘you’re ok, but a bit unsettled’ and wrote this:.

‘Sourced from SE of Margaret River township. Smells of pepperberry and black fruit with loads of black pepper. Really bitter to finish. Classy, but not seductive. Gruff tannins. Slightly obtuse’

Then I put it in the fridge (as I often do. Drinking over two days is the litmus test).

I didn’t however, expect that when I pulled out this Margaret River red (made by the reborn Clairault winery, now Clairault Streicker) tonight, I’d be impressed. In fact, I didn’t even know it was there, hidden behind an out of date carton of milk.

But there it was. And impressive it tastes, the fruit taking on a luscious, ribena juiciness that I didn’t expect. Indeed, it could almost be a sexy Adelaide Hills Shiraz/Syrah, such is the mid-weight, finely textured purpleness, backlit by hammy, cool clime spice, and tannins that now look welcomingly bitter. It’s still a bit odd (and now a little sweet), but gee it’s got a dash of seduction.

Actually, surprise wines like this make wine tasting fun. Sure, the top ‘drops’ (terrible word, but I’m using it) make you say ‘yep, they’ve nailed it’, but it is the unexpectedly cool, unexpectedly intense, unexpectedly classy wines that make you want to write long blog posts.

So, a yes from me. Maybe don’t leave this open for five days (a decent decant would do the trick), but at the very least this deserves a taste.

Hello andrew,
An out of date carton of milk and now a forgotten bottle of m.r. Red …………..sounds to me like a pattern is developing here.
Its all downhill from here …..AL

Ha. In all seriousness I've been away, which is why the milk is off. The wine? Well, my fridge is full of the stuff 🙂