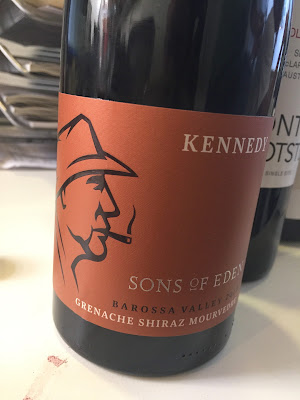 I was banging on earlier about drinkability in reds, and this is a prime example of a wine that ‘gets it’.

Sons of Eden is the label of Corey Ryan (chief winemaker for Woolworths’ huge Dorrien Estate in the Barossa) and grapegrower Simon Cowham (who manages a host of Eden Valley/Barossa vineyards). Between the two of them they see an awful lot of fruit, which is no doubt one of the reasons why this works.

The backbone of this Grenache blend is an old Grenache vineyard at Light Pass planted by the Kennedy family (hence the name), supplemented by Grenache from Rowland Flat; Shiraz from Seppeltsfield and Gomersal, and Mourvedre from Moppa and Light Pass.

Unsurprising, too, that Grenache plays a a starring role in the style, with that Grenachey joy of redcurrant, red licorice and raspberry running riot on the nose. Wonderful smells. It tastes great as well, with more red fruit, light sandy tannins and a gentle, warming finish.

The only thing I can find wrong with this is that’s it’s a little soft. Otherwise, a bloody bargain of Grenache goodness, without excess acid addition or oak intrusion.