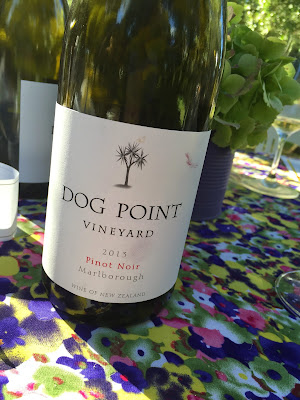 It started soon after lunchtime.

I spent much of Saturday with the crew from Marlborough’s Dog Point Wines, who kindly invited me to their Dog Point/Logan Brown ‘Classic Kiwi Picnic’ – a food and booze celebration, showcasing the new Dog Point releases, held in late summer sunshine every year.

What made this year different was not the new ’13 Dog Point Pinot Noir (which is up there with ’11 and ’06 as the best from the brand), or the bloody awesome Logan Brown lamb on a spit, but the cricket game going on much further north in Auckland.

This cricket event was more than just a game – it was a grudge match. Kiwis versus Aussies in a World Cup cricket contest thought to be the most evenly matched in 20 years.

Given that the Aussies have won numerous world cups, while the Kiwis none, the expectation was that, ultimately, the Australian team would win. They had to win. Even the mass of proud New Zealanders at my table thought it was in the bag. They were resigned to it. Especially when the first few overs went for plenty of runs.

But post-lunch things changed. The Australians lost a wicket. Then another one soon after. Then another. Every wicket after that and the crowd of 180-odd Kiwis (save for a small group of Poms and another Aussie) got more excited, louder and more triumphant. Words like ‘annihilated, ’embarrassing’ and ‘collapse’ were being tossed up, associated with much (good-natured) laughter heaped in my direction.

I sunk down in my chair. Ignored the Cricinfo updates on my phone. Went back to talking about the wine…

That’s when Dog Point winemaker James Healy took pity on me. Promised that, given I was now one of just a few downtrodden Aussies, he would open some very special wines later in the day for me to drink. A consolation prize.

This famed trio of wines were that prize.

Happily, the Australian bowlers picked themselves up too, doggedly forcing the game down to within a single wicket of victory. I started to wonder at one point whether I should be shouting the crowd Burgundy when Mitch Starc took another bag of wickets. It was close.

Yet the locals prevailed, us Aussies saved some face, and I ended up presented with this world class wine matchup.

What was even more satisfying about this ‘runners up’ wine experience was to drink the stuff. All-too-often I’ve had small glasses of Rousseau in a hurried flight of comparison wines, the emphasis more on proving just how good some other Pinot Noir was than concentrating on just drinking what was in the glass.

So what a pleasure to pour a large glass of each of these and drink on through.

My only caveat is that there were numerous wines before these three. Numerous. I was in ‘drinking marathon’ mode, so the water was flowing too, yet still I could have missed some of the finest details. 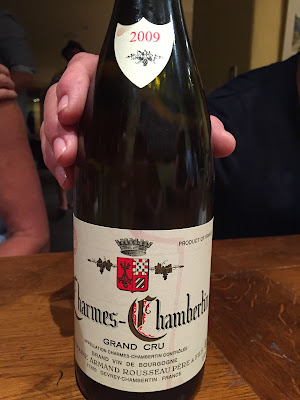 Hopefully these notes make sense regardless.

A very special thankyou also to Ivan, James and the whole Dog Point crew. Great, generous people making some of the best wines in Marlborough.

Domaine de la Romanee-Conti Echezeaux Grand Cru 2007
While many in the room thought this looked a bit average, I really liked this. It looks, smells and tastes really quite alive. Cloudy, in a ‘only lesser estates filter’ mode, the nose is utterly expressive, with tomato leaf, cranberries and black pepper. That palate is open and quite silken too, if soft edged and coddled with a little warmth. There’s a slight bitter/sweetness to the palate and pippy tannins which suggests less than perfect ripeness. But it also gives this a thoroughly flawed beauty. A wine that is glorious and vintage specific, open and soft, yet drying too. You can spot the blemishes, but still I couldn’t help but be hooked in. 18.7/20, 95/100

Domaine Armand Rousseau Pere et Fils Charmes-Chambertin Grand Cru 2009
Immediately more bright than the Echezeaux. More translucent too. There’s a beauty and polish to this, an endless flow of satiny fruit. Gee it’s long. Muscular too, ripe and almost new-worldish in the lift of red fruit. Gee it’s long too, long and bright and powerful, the warm year grunt powering through with late alcohol warmth. Yet it’s not quite beautiful. It’s a wine for later, tripped up now by a whiff of caramel and confronting power. It will arguably be a better wine than the DRC in time, and many in the room preferred it, but still, not beautiful. Hard to fault the form though. 18.5/20, 94/100+

Domaine Mongeard-Mugneret Clos de Vougeot Grand Cru 2005
Back to earth. With a thud. This is unequivocally a wine for the future, but its construction looks clumsy. The oak is sweet and intrusive, the tannins hard edged, the wafts of pooey development less attractive than you’d want. Admirable length though. You know exactly what you’re getting here. And it tastes like serious Burgundy. Yet there are much more satisfying Aussie or Kiwi Pinots than this, at a much lower price (plenty of top Bass Phillip Pinots have this wines measure). Good not great. 17.5/20, 91/100