Taylors, the Wallabies and a new unreleased super Cabernet 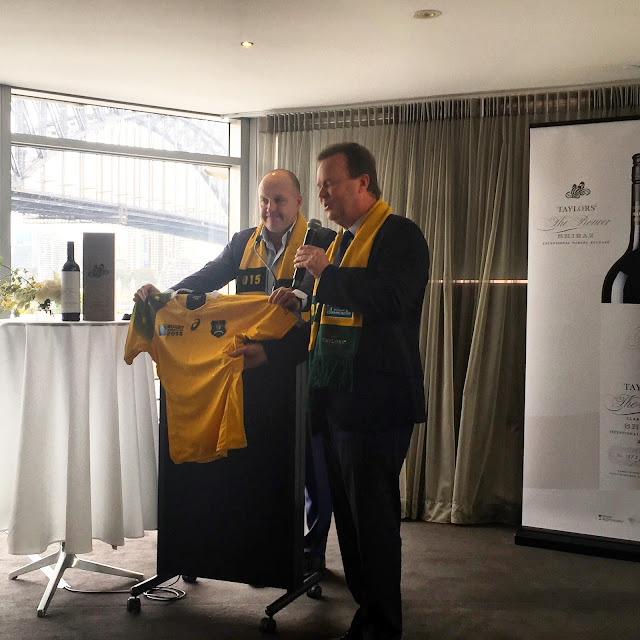 So Thursday I spent my lunchtime talking Australian Rugby,

That’s an odd Thursday as I’m largely an AFL/cricket/cycling fan. But there was wine too, as this was a lunch to celebrate the new partnership between Taylors Wines (AKA Wakefield in the UK/Europe) and the Qantas Wallabies (AKA the Australian national Rugby Union team) which will see Taylors become the official wine partner of the Wallabies.

Now I’ve always thought of rugby as more of a rum sport than wine, with all the boys I know who play rugby known to drink Bundy OP like it’s water. Still, as they’ve gotten older, said gents have now moved onto red wine, which they also drink like water – so it’s probably a fair matchup.

Taylors will thus become the official wine supplier and sponsor of the Wallabies for the next three years.

I didn’t go to lunch for the rugby anecdotes, however (though they were good. Stu Gregor was MC and his banter was top class), as this instead was just a perfect opportunity to try some of the new super-duper flagship Pioneer and Visionary Wines.

The inspiration for this renewed interest in premium Taylors wines was a bottle of ’09 Visionary, which felt like coming in from the cold. Previously, it’s fair to say I’ve been out of love with Taylors for a while, to the point where they stopped sending me samples as I couldn’t find much nice to say. At all. But that Visionary tapped right into that part of my soul that loves grunty Clare reds, and it looked better balanced than anything I’d seen from Taylors in many years.

The soon-to-be-released 2012 vintage is even better again.

I tried this little lineup of Taylors Wines then over lunch. Interesting to see the style of the Chardonnay, which looked almost from another era, the style relying on minimal malo for freshness but with a level of oak and fruit richness seems quite an anomaly in the world of 2015 Australian Chardonnay. I wasn’t a fan at all, yet it’s apparently very popular. 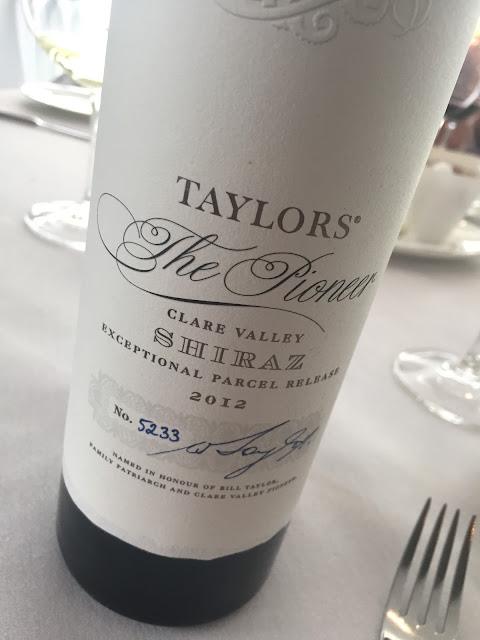 11.5% alcohol. Green straw, this is initially juicy and generous, the fruit quite peachy, before a driving, grippy finish. It’s just a bit rough and tumble for a super premium Riesling, but good intensity and great length, if raw. Needs five years to show its best. 17.5/20, 91/100+

Butter and nuts, the nose a cabal of toasty, full and oaky flavour, heading towards caramel and butterscotch, the palate burnished and chunky, every bit the old school Aussie Chardonnay initially before a clunk of acid firmness. It’s full and powerful, if contrived, built to win trophies but a bit thick and obvious for big points, before a quite tart finish. Less would be more methinks. 16.8/20, 89/100

Dark red purple, an oak forest or two died for this wine. Still, underneath there is mint, the oak contributing caramel, the palate surprisingly balanced and even mid weight with its purple red fruit, chocolate and lovely texture. Oak and fruit are big, but the palate texture and weight nods to high class wine. It’s still oak-sweet and tart on the finish, but quality wine no doubt. 18.3/20, 93/100+

Ahh Clare Cabernet, you do ring my bell (sometimes). Eucalypt. Cedar. Choc mint. More mint. More chocolate. More fruit. The mint integrates in time though, the chocolate oak is woven through the palate and the beauty is the length – it’s a seriously long, with a flooding firmness that always marks out the best Clare reds (like Wendouree). This should live for 30 years, and though the price is steep ($200 when it’s released later in the year apparently) it will be a very safe drinking investment. Very serious and even surprisingly drinkable, despite the ripping tannins. 18.6/20, 94/100+