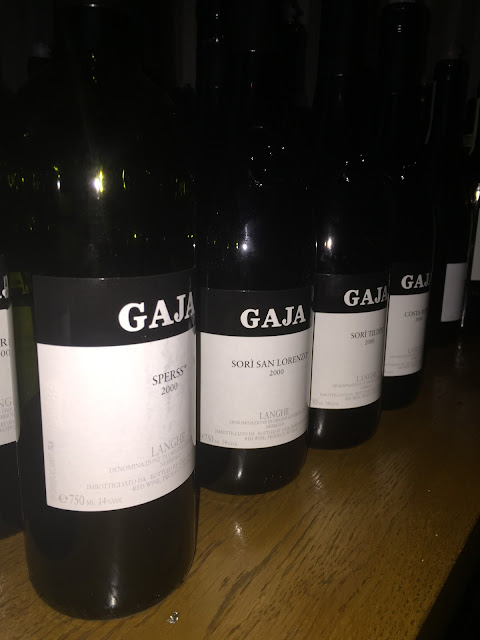 You’d think that the daughter of Piedmont producer Angelo Gaja – long feted as a king of Italian wine – would be anything but approachable.

It’s quite unexpected really, and when she came to town recently she willingly let slip plenty of thoughts that your average heiress to a wine empire would never say.

As for the family winery – I’ll admit to mixed feelings. That’s largely because the indelible hand of winemaker are a little too dominant in the wines of Gaja. Yet the wines Gaia brought with her, alongside that open and honest personality, had me rethinking my opinions.

It seems a very different time and place now from here at Dookie, but these wines were tasted with Gaia a little while back at a Sommeliers Australia event. What a pleasure it was to see some older wines on taste too, even from an indifferent vintage.

A great afternoon, enhanced by endless interesting tidbits from Gaia herself, like this pertinent little quote that sits nicely with Gaja’s history:

‘Many producers do things based on their own different crazy ideas.’

These notes are as written on the day. All quotes are from Gaia and I’ve included some of her throw-away lines, just because they’re eminently quotable.

Gaja Rossj Bass Chardonnay 2012
‘An unusual way to start a Piemonte tasting. If you make white wine in Piemonte you are second rate’. Bass means low, facing north and Rossj is Gaia’s sister. This is produced from two family vineyards. 5% Sauvignon in the blend. ‘The Piemonte Chardonnay characteristic is acidity, perfumes tend to be quite floral and fruit is white fruits. The spice here is ginger and something earthy. Spice and anise’
Glowing green straw. White peach and white flowers. Oak plays a big part here and supported by elevated acidity and some grippy oak tannins. Blocky, but propped up with fresh acidity. Long, but a blunt Chardonnay and shaped by oak. Good, but not magnificent – it’s a bit hard and oak tannic for that. 17.7/20, 92/100

Beyond Piedmont, the Gaja family also have ventured into Tuscany, in 1994 acquiring Pieve Santa Restituta in Montalcino and following that up with the purchase of Ca’Marcanda in Bolgheri circa 1996.

‘Montalcino is the first place my father went. Sangiovese and Nebbiolo share lots of similarities. Nebbiolo is more essential than Sangio. There is more juiciness in Sangio, more fruit in the mouth’

On the challenges of clay soil for Sangiovese: ‘Clay soil is a problem for Sangio. The plant drinks a bit. It overreacts and can double in size over a week!’

Pieve di Santa Restituta Brunello 2008
Mid red. Bricking edges. Forward and sticky, it feels a fraction stewed, though the tannins are classy. Drying tannins and a little warmish. Not the greatest bottle? Class underneath but average in the scheme of things. 16.5/20, 88/100

Pieve di Santa Restituta Brunello ‘Rennin’ 2008
Mid red. Just a little bricking at the rim. Wet bricks and a little stewed fruit. Aggressive and alcoholic palate has some subtleties but the forward nature and lumpy alcohol and acid is not perfect. 16.8/20, 89/100

Pieve di Santa Restituta Brunello ‘Sugarille’ 2008
Dark red and a little bricking at the rim. The reddest wine of the lineup. This smells the most concentrated of the trio, more red fruit and the alcohol looks better balanced; the tannins finer and the balance quite smart. It’s still quite truffled and lacks some freshness, but there’s a wildness here too. Quality. Love to see this in a great vintage. 17.7/20, 92/100

Gaia on changing perspectives about wine maturation: ‘My father never thought that extra ageing in wood would make a greater wine. Lately I more and more agree with him.’

Gaja Langhe ‘Sito Moresco’ 2010
‘2010 is classic in Piemonte. Doesn’t lean in one direction it is very straight. Big differences between cru. Nevertheless I find the 2011 charming.’ This is a blend of 35% Nebbiolo, 35% Merlot and 30 Cabernet Sauvignon.
Dark maroon red with a little purple on the edge. Juicy and vibrant, yet still quite even, this feels very Nebbiolo young with that classic Neb tannins but fruit too. Flattering, not too generous but lovely even character. Nice wine, if just a little fruity. Lovely Neb tannins. 17.8/20, 92/100

Gaja Barbaresco 2011
‘Barbaresco was always trying to be Barolo but seen as lesser. Part of this is because the king was making wine in Barolo. Also, Nebbiolo continued to be made in tough times… Barbaresco is just 800 hectares, whereas Barolo is much larger. Marine soil in both areas. Older soil in Barbaresco. More sand and softer sand in Barbaresco’
Dark red ruby, just a little lighter edges. Molasses and chocolate here, this is very open and flattering. Alcoholic too. Very tight but also just a little alcoholic. Lovely and open, but not classic. A bit caramelised too. But still classy. I’d prefer the Sito Moresco personally, though that should change in time. 17.5/20, 91/100+

Gaja Langhe ‘Costa Russi’ 2000
From same slope as Sori Tildin. ‘Not as earthy as Barolo’
Deep red, just a little brick in there. Quite open and sweet nose, in lovely shape for a 15yr old! Roses, rose cuttings, the moderate and even gentle palate. It’s quite moderate and quite beautiful, tannins still grippy, it’s not quite as complex as some older Barolo but such refinement! Gentle and lovely, I could enjoy drinking this. 18/20, 93/100

Gaja Langhe ‘Sori San Lorenzo’ 2000
This became a blend in 1996 – Barbera is cofermented. ‘This vineyard is always bright green even in summer. It’s like the salad that is sprayed with water in the supermarket… More limestone in the soil here and wine has more extract… Barbera gives a sensation of roundness… 2000 is very interesting, the Barbera was very useful in 2000.’
Dark red. Return of molasses here, but it hides what is easily the most tannic and youthful style. Can’t believe this is 15 years old. Much more grip and swagger, compared to the wines before it this has less emphasis on tannins and more on balance. I love this. 18.7/20, 95/100

Gaja Langhe ‘Sperss’ 2000
‘Wet soil, licorice, soil. In Barbaresco more raspberry, more dark berries in Barolo’
Deep maroon with a little bricking. Wet earth and almost aggressive, this lacks some of the beauty of the Barbaresco, it’s much more dark earth and chocolate. Guttural, very late tannins. Not as much beauty here, but the hints of fish oil are very classic. 18/20, 93/100

Gaja Langhe ‘Conteisa’ 2000
‘Nebbiolo is an intimate wine. Tannins are a brush that cleans up your palate. Nebbiolo is so delicate that it hits in the back… I drink Nebbiolo up to 5 years old when it is pretty. Wine is like people. Drink then only after 10. 2004 back now. The 90s are marvellous right now’
Dark maroon. This may be dark but it’s a much lighter touch than the wines around it. Caramel chews meet fine gamey flavours. A curious wine – fragrant and quite rustic but delicate. Like this. But is it lacking the carry? Lovely wine regardless. 18.5/20, 94/100

Gaia on older Barolo: ‘The 74 when you open it tastes like vinegar. By end of day it was lovely’

About the drinkability of Nebbiolo ‘When I go out I devote the whole night to one bottle. A magnum’

Gaja Langhe ‘Damargi’ 2000
Deep red. Leaf and mulch meets caramel. Unequivocally Cabernet, but perhaps a little bitter. It’s just not as juicy and pretty as the wines before it. In rude health but I just don’t like its aggression. 17.5/20, 91/100

Ca’Marcanda Promis’ IGT 2011
A blend of Merlot, Syrah and Sangiovese.
Bright red. Generous and modern. Sweet choc oak and a slightly skittish palate. Simple and plump. Not a Gaja by any measure. Skinny but ripe, defined by caramel oak. A little ordinary. 16/20, 87/100

Ca’Marcanda Magari Toscana’ IGT 2011
Bright red and a shade of purple. Choc oak and a modern sweet fruit. Could be from anywhere. Smoky chocolate fruit and just a dull fudgey palate. 16.5/20, 88/100

Ca’Marcanda Bolgheri’ IGT 2010
Sweet purple berries. Lots of oak. There’s a promising depth to this that the simple and ripe skinnier style before it. Still not a patch on the Nebbiolo but there is some chocolatey weight. Some wild berry pretty fruit here, but a bit same same for higher points. 17.5/20, 91/100