Another day, another lineup of great 2014 Hunter Shiraz. It’s becoming a bit of a theme (you can start here, then here, then here), and I’m not complaining. Go on, go buy some.

Today’s lineup is proudly brought to you by Mike de Iuliis, the man with the most vowels in the wine industry (sorry, old joke). I think these 2014 Shiraz are his best work to date, with a vibrancy and berry freshness without losing concentration, making for some very satisfying, classic wines. 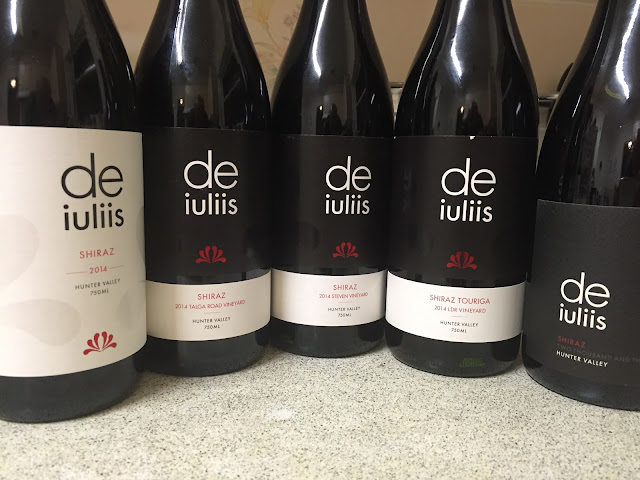 De Iuliis Shiraz 2014
Purple edged maroon red; the nose laden with squishy, soft and quite delicious purple berries in an unforced, ripe but blackberry fruited round and gentle style, a slick of vanilla bean oak and just a little warmth – but no heaviness on the finish. This is just a lovely bowl full of red and black berries without going into sweetness excesses, just long and silky smooth and satisfying. Delicious, long and delightfully affable, if not quite the concentration of the single vineyard wines. Still delicious though. Great value for money too. Best drinking: 2015-2030. 18/20, 93/100. 14.5%, $25. Would I buy it? Absolutely.

These two I tasted as a direct comparison.

De Iuliis Talga Road Vineyard Shiraz 2014
From a youngish vineyard in Rothbury that Mike praises for its depth and colour. Deep purple red, it’s probably the most purple wine in this lineup. It smells and tastes of berries too – liqeured red and black berries in a style immediately concentrated and even slightly oily in its viscosity, yet still with that same red berry juiciness. Maybe a little warm but that’s clearly a sacrifice for such a dense, lingering back palate thickness that spreads out through the finish. Very long, if perhaps less classic Hunter in its purple berry flavours. Such impressive length and weight though! High high quality. I wanted to drink all of this. Superb. Best drinking: 2015-2030+. 18.7/20, 95/100. 14.8%, $40. Would I buy it? Definitely.

De Iuliis Steven Vineyard Shiraz 2014
From the Steven Vineyard, planted in 1968 on classic red Hunter soil. Less purple than the Talga Road, it’s more red purple. It’s quite jubey and sweet this wine too, candied berry fruits without quite the same weight or breadth of the Talga. The red berries here feel just a little candied and it doesn’t quite pack the length of the Talga. I’d actually marginally prefer the straight Shiraz which nails the finish. It’s still quality, but I don’t feel it’s in the ballpark of the other two wines, which is a surprise. Best drinking: 2015-2028. 17.7/20, 92/100. 14.2%, $40. Would I buy it? Not after the other two.

De Iuliis LDR Shiraz Touriga 2014
15% Touriga from vines planted in 2008 on the De Iuliis family vineyard. Deep red with just a little purple on the edges. Immediately a different beast in this lineup, with deep earthy edges and a roasted  meatiness too. There’s a charming Hunter Burgundy style to this and it’s going to live (though maybe not as much as the pure Shiraz?) and woo plenty of people along the way. A standout. Best drinking: 2015-2028+. 18.5/20, 94/100. 13.5%, $40. Would I buy it? I’d drink a bottle.

De Iuliis Limited Release Shiraz 2013
A barrel selection with just 250 dozen produced. You can see the difference in the vintage, though ’13 was very good too. Still plenty of purple in the colour of this one, the nose showing more milky oak than any other in this lineup. It’s quite thick and almost syrupy after the other wines actually, wavering between rich and weighty before the bits of earthy Hunger berries pop through in a slick, berried and slightly oaky palate. Great length and impact, the finish punctuated by generous berry fruit. I get the feeling this is a long haul wine, building in bottle. High quality and long. Best drinking 2015-2032+. 18.5/20, 94/100. 13.8%, $80. Would I buy it? I’d probably buy the single vineyard Shiraz over this, but it still has loads of appeal. This is gonna be a hell of a xmas/ new year holiday in HV !

Surprised on the Steven verdict! Thought it would be better than that.

Normally it's my standout. This particular bottle did not move me.

Great Review Andrew. The Steven was my stand out of the bunch, but the Touriga not to far behind.

Talga – didnt woo me as much, a bit to hot and a bit to overripe alcohol. I think it was picked 2 weeks after Steven and LDR, which had some serious sexy mencia/grenache like perfume and spice to me.

Cracking wines from Mike all up