A brand new iconic Barossa Shiraz has landed, this time from a quite different source

It’s hard to avoid scepticism when a winery launches a brand new wine for $175. Really hard. The only producers who can get away with it probably already have even more expensive wines in their portfolio (like Penfolds). But when you’re talking about a Riverina winery known for cheap and cheerful, that scepticism is unavoidable. 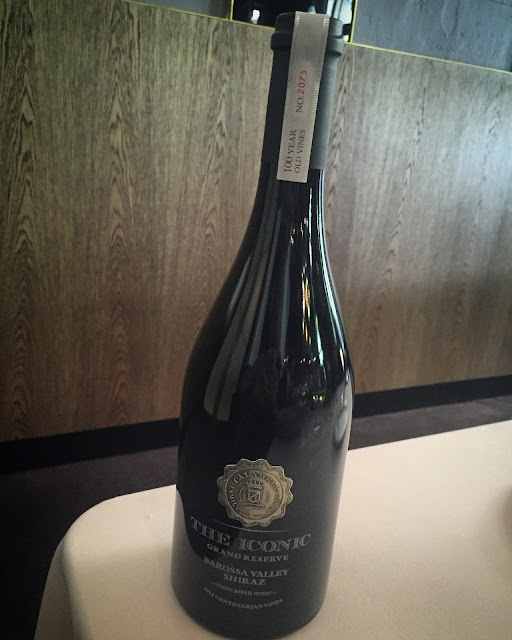 Suffice to say that my sceptometer was turned up to max strength today for the launch of the Calabria Family Wines The Iconic Grand Reserve Barossa Shiraz. While I respect Bill Calabria – who is a genuinely honest, no bullshit winemaker with a reputation for hard work and charity – and family, it really is a struggle to make the connection between honest, value-for-money wine and something called The Iconic Grand Reserve.

However, even I was surprised by how impressive this wine tasted. It might have been helped by the fact that Bill gave me half his lunch (he offered as wasn’t hungry. I was starving), or the excellent stories that Bill comes out with. But neither of them can account for when you pick up a wine and are distracted by how well it tastes. I sat there at lunch, consuming an excellent steak (at Sydney’s Bentley Restaurant & Bar) and tried to poke holes in the wine, convinced the superb food and banter was just a source of bias.

But the wine just didn’t fall over. Sure it’s a massive jump from the typically Calabria Wines range (which is satisfying and well priced, yet rarely hits high notes), but it didn’t feel like your usual overoaked, overdone, sloppy attempt at a flagship.

Ultimately I can just dip my lid. The price is still crazy, the bottle huge, heavy and with a punt so large you could lose a hand in there. Yet the juice inside is well worth drinking…

This comes off vines planted by the Hahn family in 1914 near the Hahn homestead between Tanunda and Nurioopta, Bill bought this vineyard in 2010 off the receivers for $800k after some conspicuously drawn out negotiations (a great story behind that too). Hand-picked, hand-sorted this spent seven days fermenting in an open vat before being pressed to barrel where it spent 18 months, followed up by 12 months in bottle.

You can smell the oak from first whiff, all moccha and milk chocolate. Clearly expensive oak, though as it doesn’t stick out, just an opening thrust. Underneath it’s quite moderate and savoury, gentle event, with that softness and evenness that sees this as a companion rather than a sparring partner. Andrew Calabria (Bill’s son) said that ‘we didn’t want to overextract this’ and clearly they haven’t. Long, but not necessarily endless, the alcohol a final check without heat. All in, this reminded me of some of those mid 90s vintages of Rockford Basket Press. Enjoyable stuff, if not earth-shattering, and satisfying balanced. Best drinking: 2015-2030+. 18.5/20, 94/100. 14%, $175.