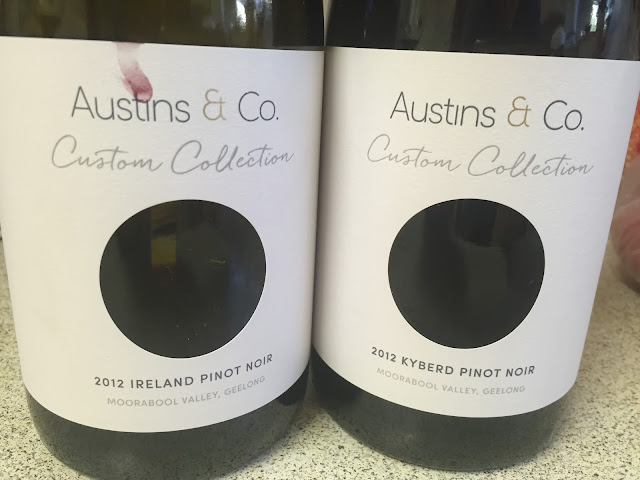 Now this is a fun concept.

Austins & Co. have decided to explore just how much impact the ‘hand of man’ can be, have by inviting two winemakers to do what they want with two identical parcels of Geelong Pinot Noir.

Here, Scott Ireland (winemaker at Austin’s in Geelong) and Michael Kyberd (from Tucks Ridge and previously Red Hill Estate) were each given two tonnes of fruit from the Austin family’s Moorabool Valley vineyard and given a brief to do what they wanted and make a wine their own way.

Critically, the grapes were almost identical, with each winemaker given 1 tonne of MV6 clone Pinot Noir fruit and 1 tonne of D2V6 clone, all picked on the same day and delivered at the same time.

Where things diverge is the handling, with each winemaker taking a slightly different path (which does help to differentiate them) with their grapes.

Both of these wines still ended up at 13% alcohol, so no bizarre sweet styles, and both sell $50.

Juicy and cherry-fruited, this is much more lifted than the Kyberd. Dusty cherry, a little meaty hammy Geelong goodness, its initial juicier but there is that more savoury, slightly more dry edge to the tannins. It’s perhaps a little more volatile but also carries more firmness. Delicious though. It’s just a little brawny and beefy, but nice wine all the same. 18/20, 93/100

In contrast this has less obvious fruit, more hammy complexity. It’s definitely got more layers, though I think I like the tannins a little more on the Ireland. Again a dark cherry, slightly meaty style that straddles the edge of that bacony, Geelong Pinot style. This, for mine, just has the completeness of the two. A close run thing though. Both very good. 18.1/20, 93/100